January 10, 2020
Board of Supervisors
Port of the Islands
Community Improvement District

The regular meeting of the Port of The Islands Community Improvement District Board of Supervisors will be held on January 17, 2020 at 9 AM at the Orchid Cove Clubhouse on 25005 Peacock Lane in Naples, FL 34114. The Agenda is included in Section 2 and a few points of interest are as follows:

Any supporting documents not enclosed will be distributed at the meeting. The next meeting is scheduled for February 21, 2020. If there are any questions or requests prior to the meeting, feel free to contact me.

The meeting of the Port of the Islands Community Improvement District was held on Friday December 20, 2019 at 9 a.m. at the Orchid Cove Community Center on 25005 Peacock Lane in Naples, Florida 34114.

On MOTION by Chairman Davis, seconded by Supervisor O’Connell, with all in favor, the Agenda was approved as presented.

On MOTION by Chairman Davis, seconded by Supervisor Kehlmeier, with all in favor, the Meeting Minutes for November 15, 2019 are approved as presented.

A. Report for November

On Motion by Chairman Davis, seconded by Supervisor O’Connell, with all in favor, the Board approved the estimate from Soto’s Lawn Service for $1,250.

On MOTION by Chairman Davis, seconded by Supervisor O’Connell, with all in favor, the Board accepted the Financial Statements for November 30, 2019 as presented.

The District Manager updated the Board that the Agenda Packet was created entirely on the website and that the website will be going live soon.

The Board discussed a utility billing issue where a meter is being replaced and the customer is being charged a significant amount more than usual. The Board agreed to wait until the next meter reading with the new meter installed and decided how to adjust the customers bill based on that reading.

A. Field Report for December

The District Engineer stated that the report was submitted a month or two ago and since then they have received a letter asking a few questions which have been addressed by his team.

B. Options for Drainage Swale Maintenance

The District Attorney stated that he is going to reach out to the County again after the first of the year in regards to having another meeting.

The District Attorney stated that the outcome of the sit down meeting with the marina owner was that he now has a better understanding of why the Board increased the boat slip assessments. He is still not happy that there has been no additional comments from them.

The District Manager stated that there is currently no irrigation to support the planting of littorals, so this project has been pushed back to the rainy season in order to give the littorals a better chance of survival.

The District Manager stated that the repairs have been completed.

This Agenda item was not discussed.

Two options were presented for mosquito spraying and discussed briefly. One was to have Florida Utility Solutions personnel perform the spraying and the other was from a vendor who presented another option. The Board also discussed whether the Collier County Mosquito Control District was an option. The Board agreed to wait and discuss this further at the next meeting.

Chairman Davis discussed a new Publix and some other developments that are being built near the community soon.

Supervisor O’Connell suggested that the Board do something nice for Florida Utility Solutions as a thank for for painting the fire hydrants, such as a lunch or a honey baked ham.

On MOTION by Supervisor Dillon, seconded by Chairman Davis, with all in favor, the meeting was adjourned at 10:31 a.m. 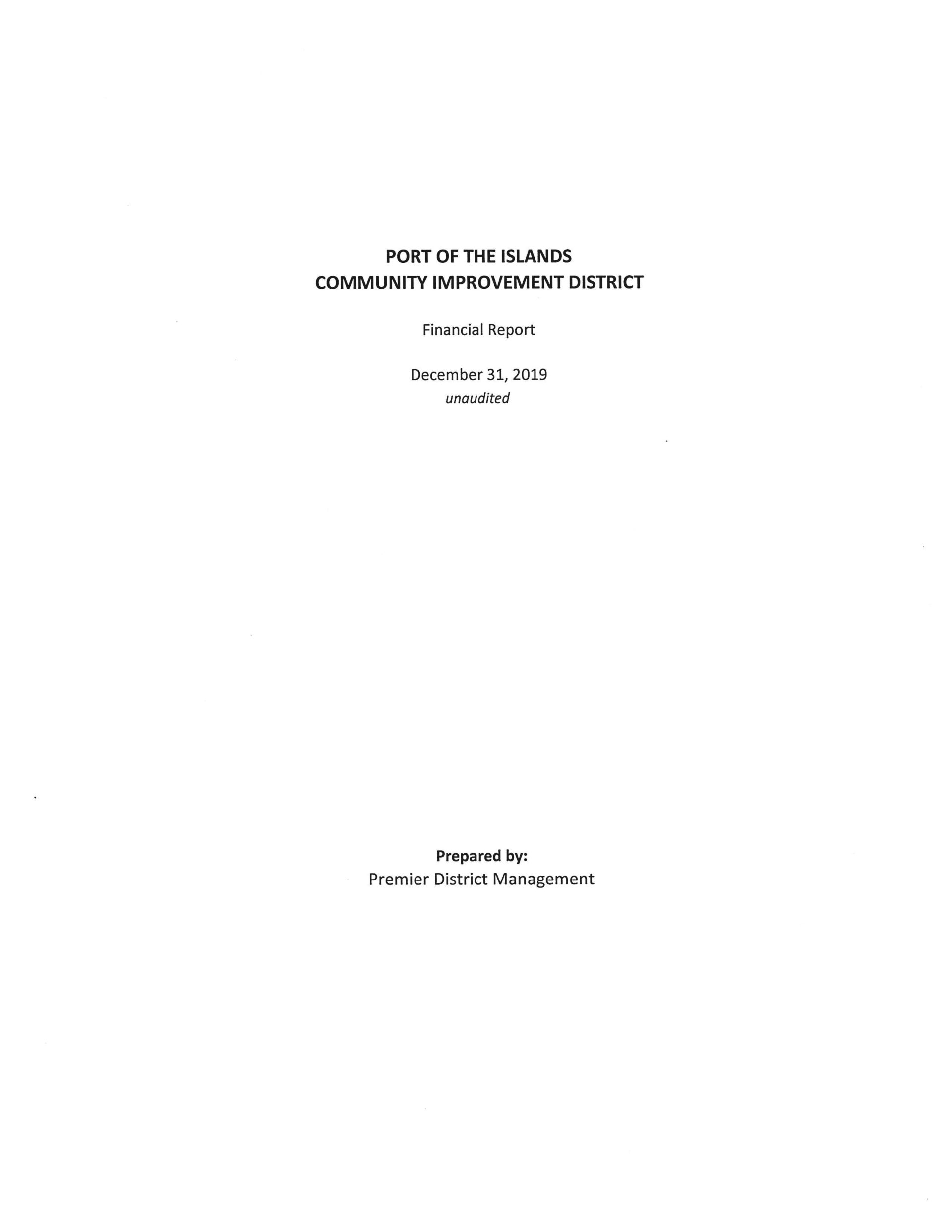 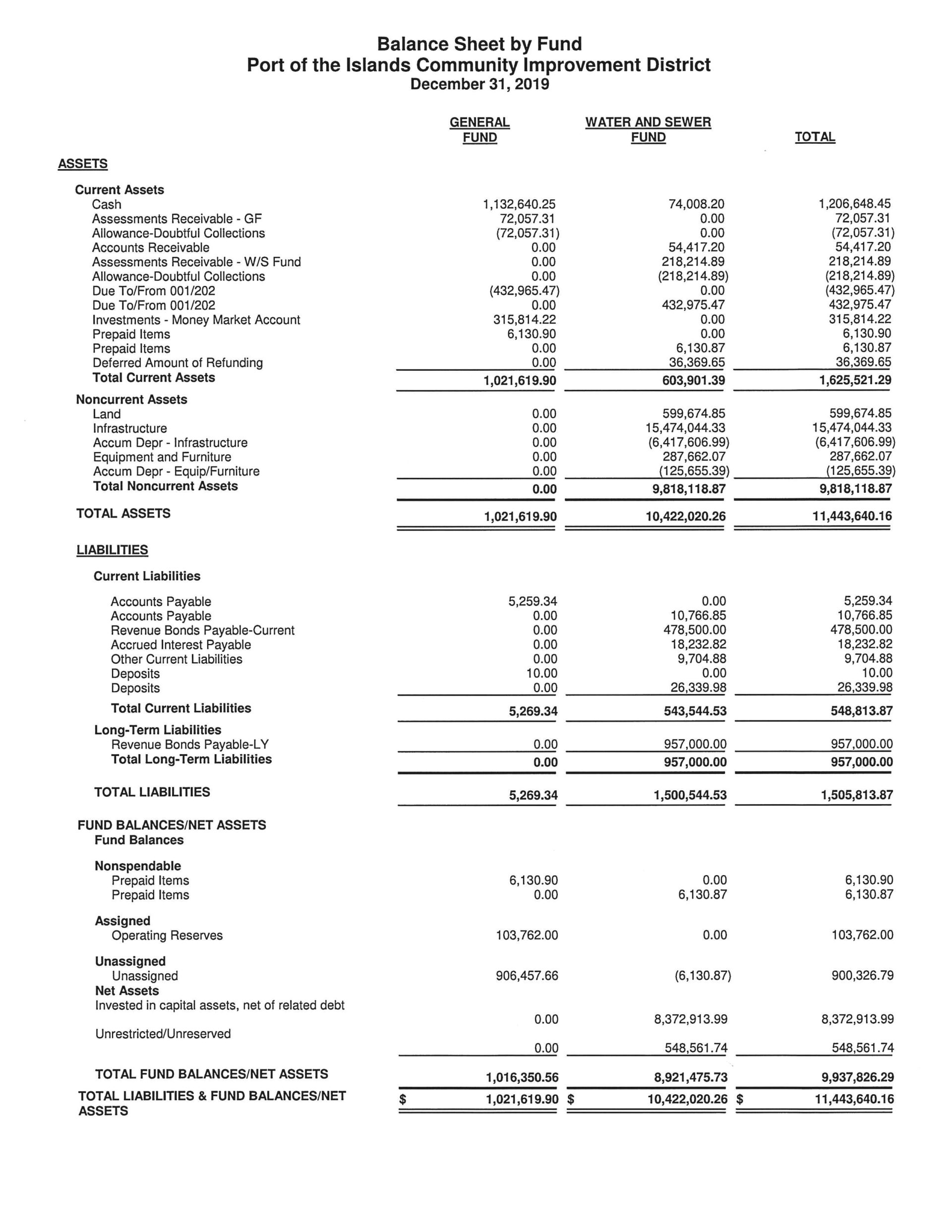 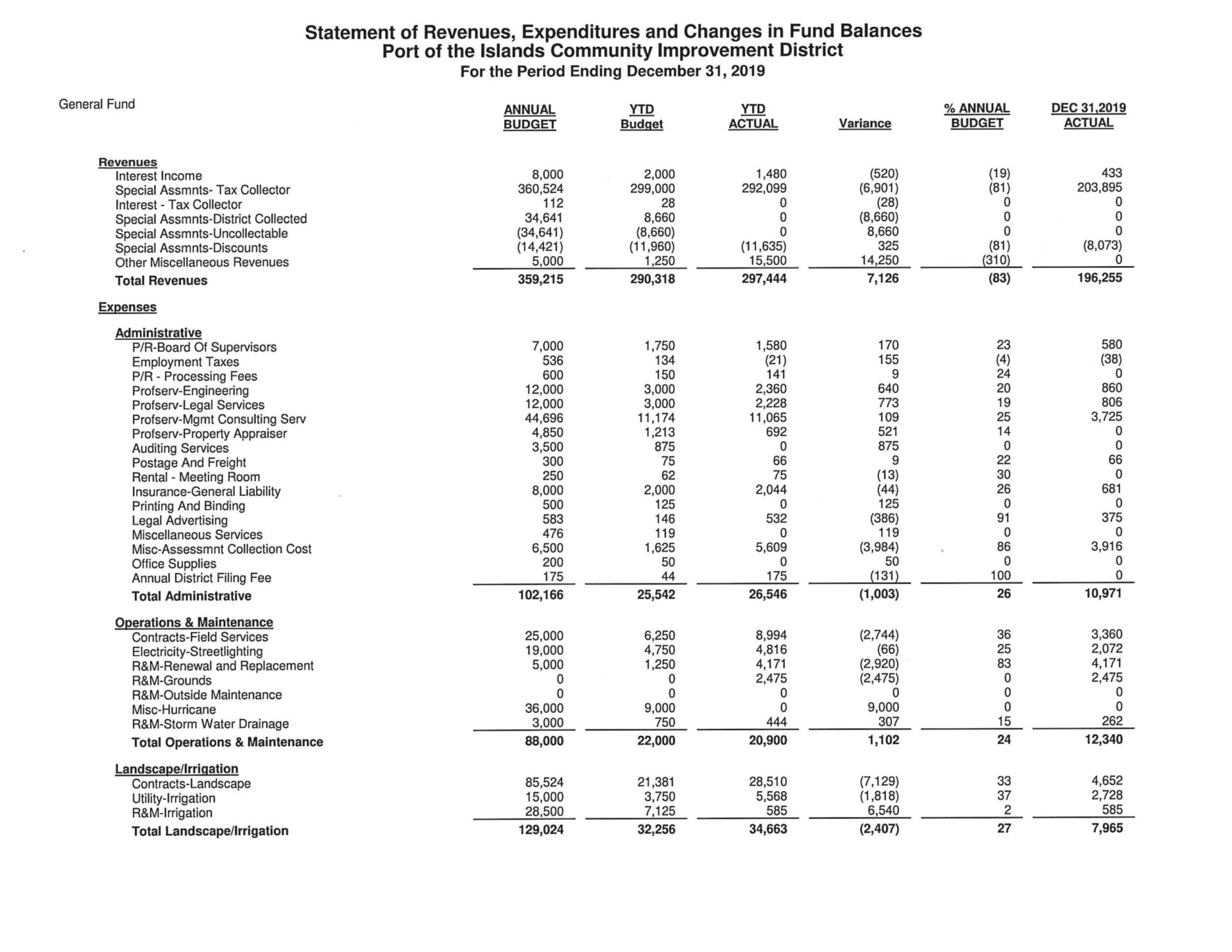 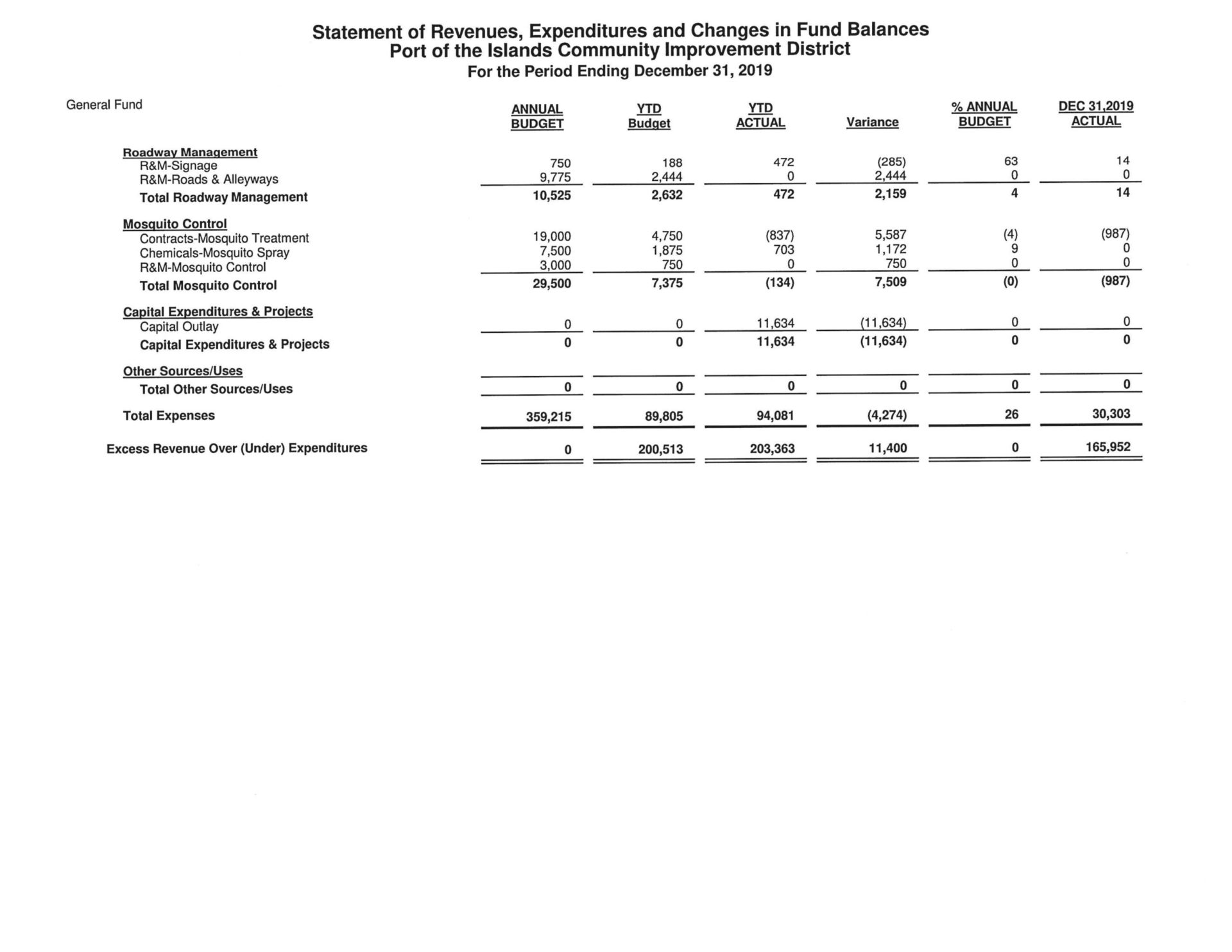 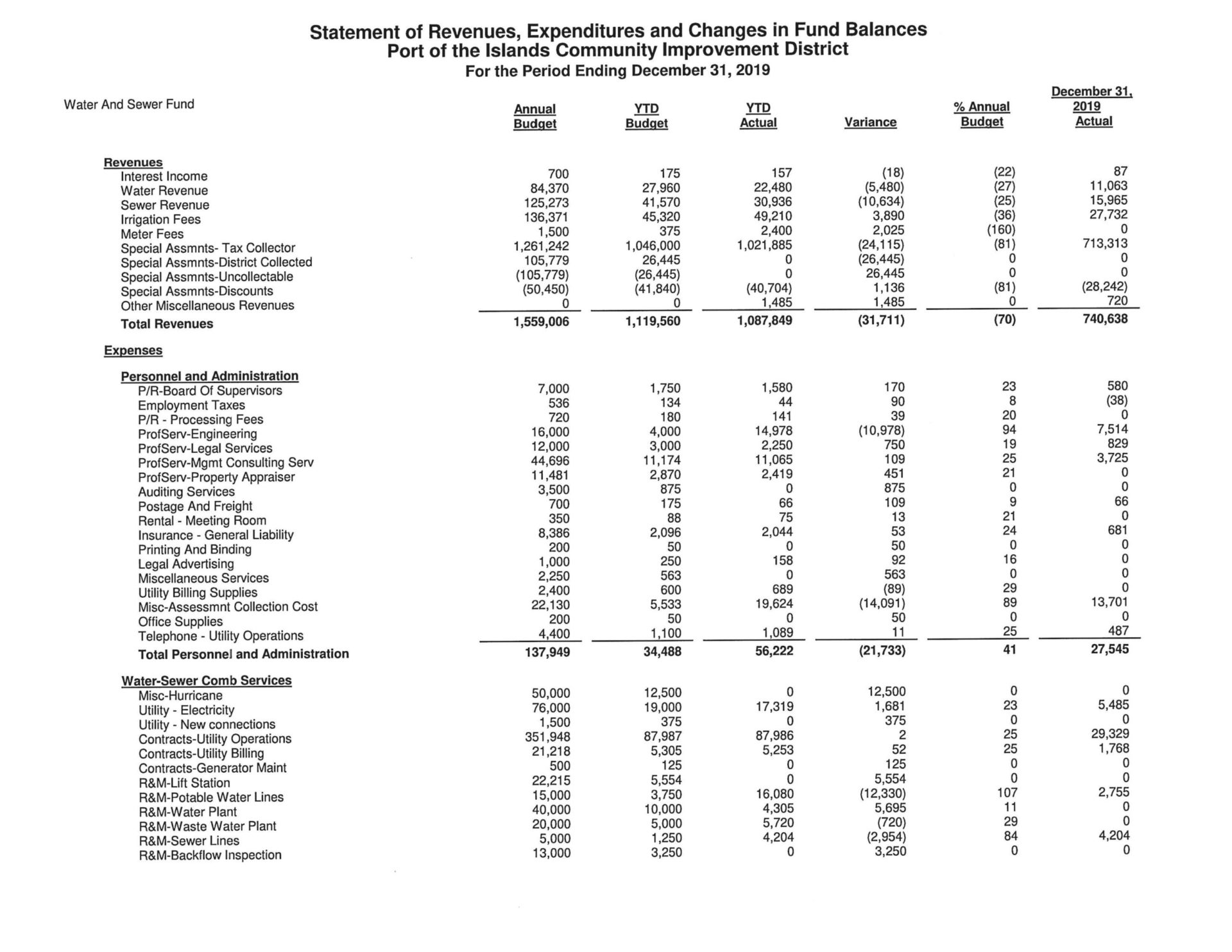 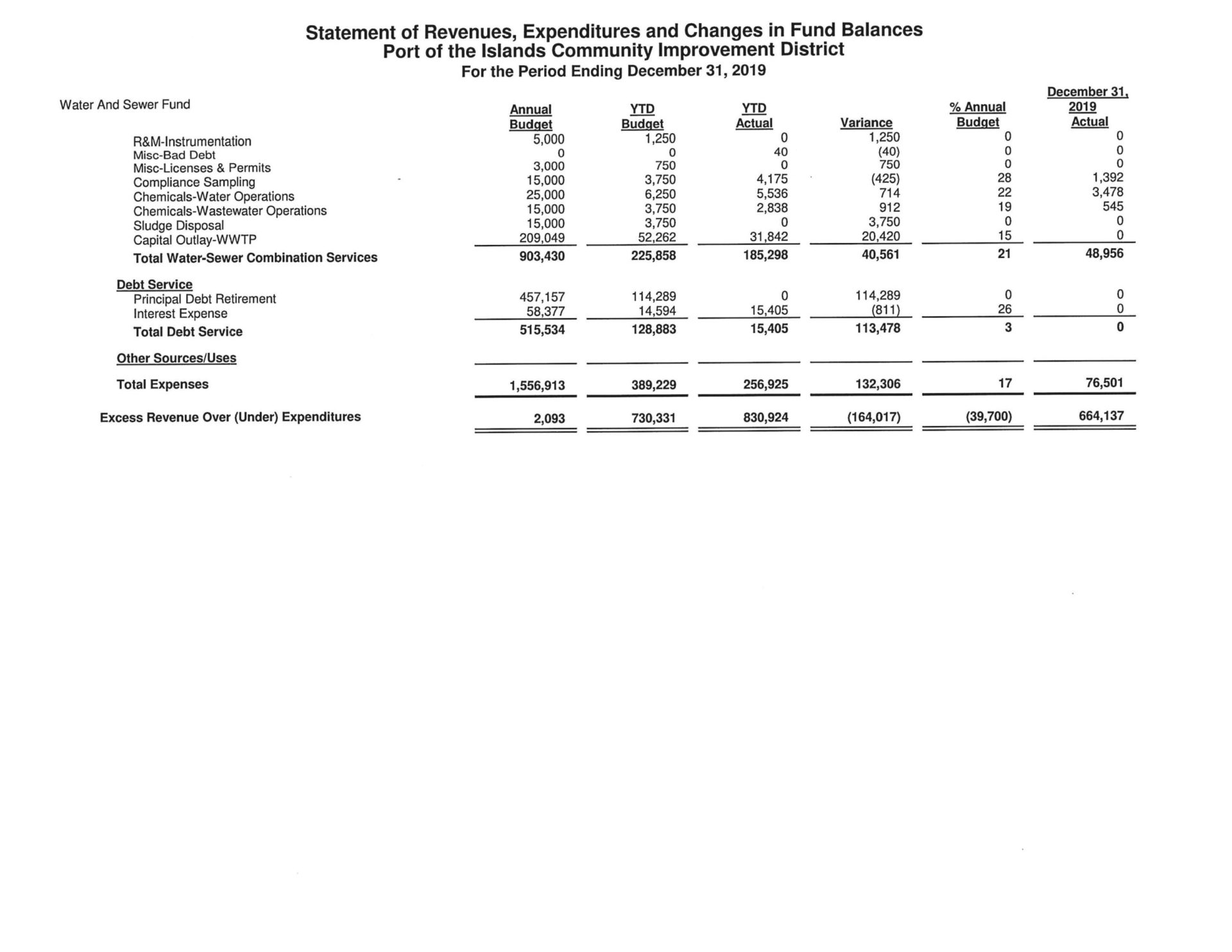 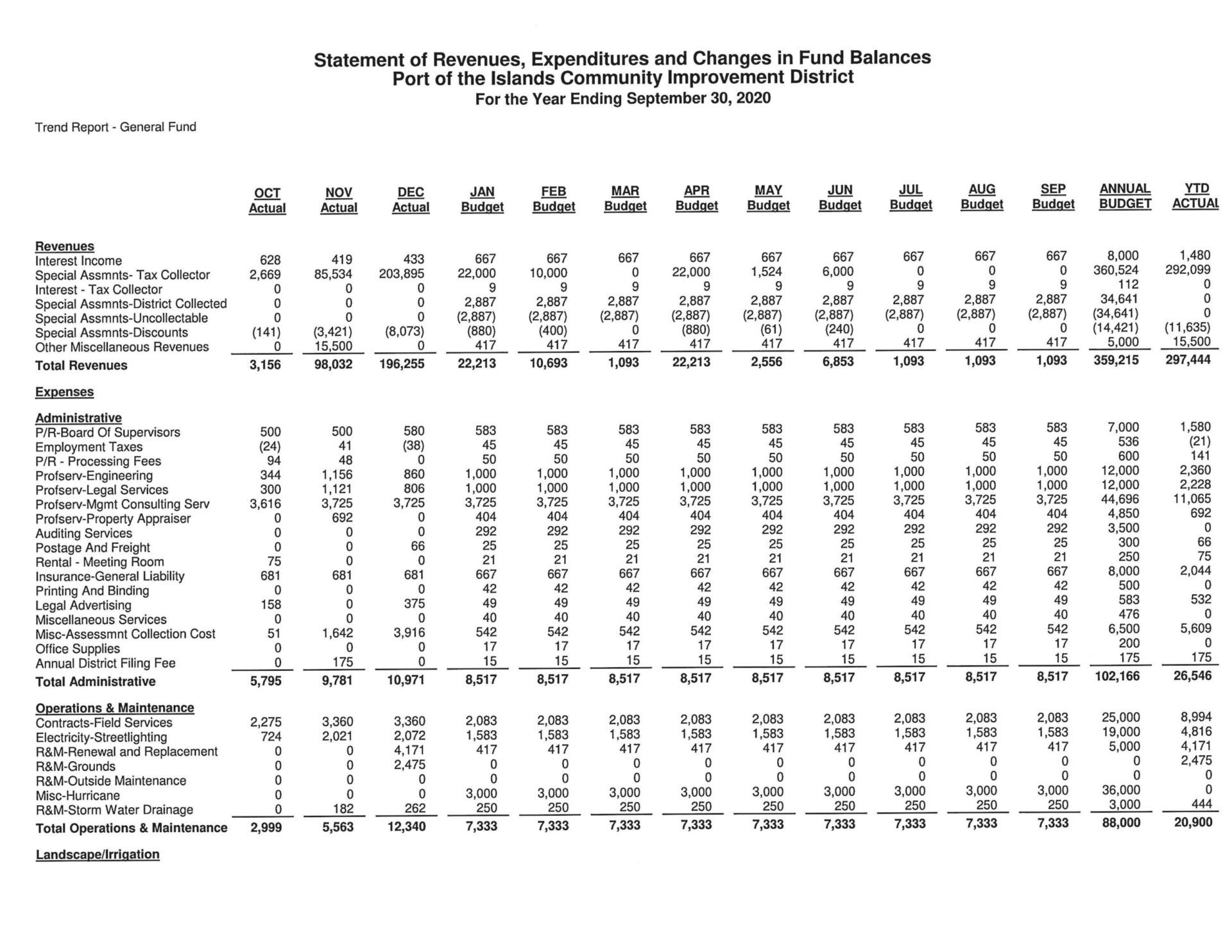 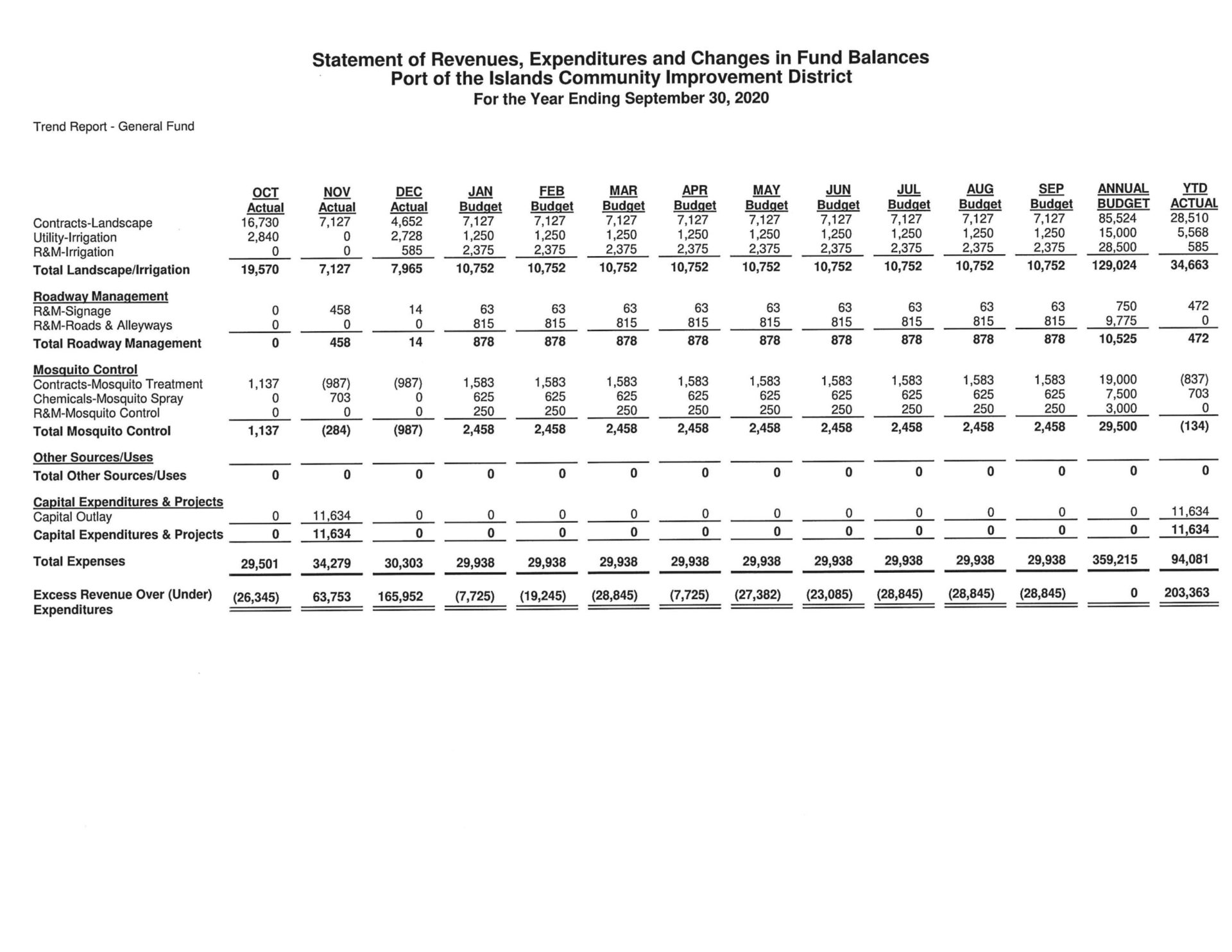 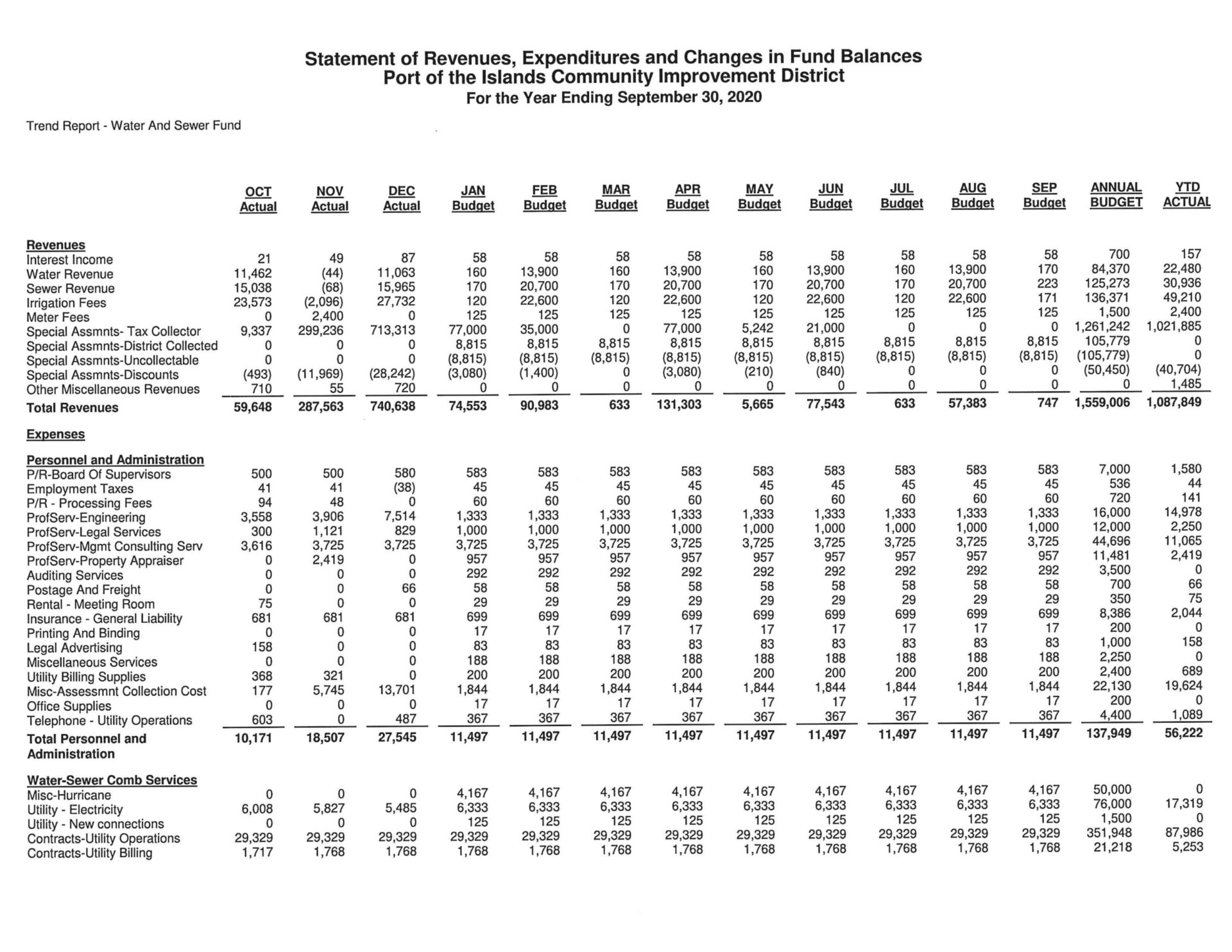 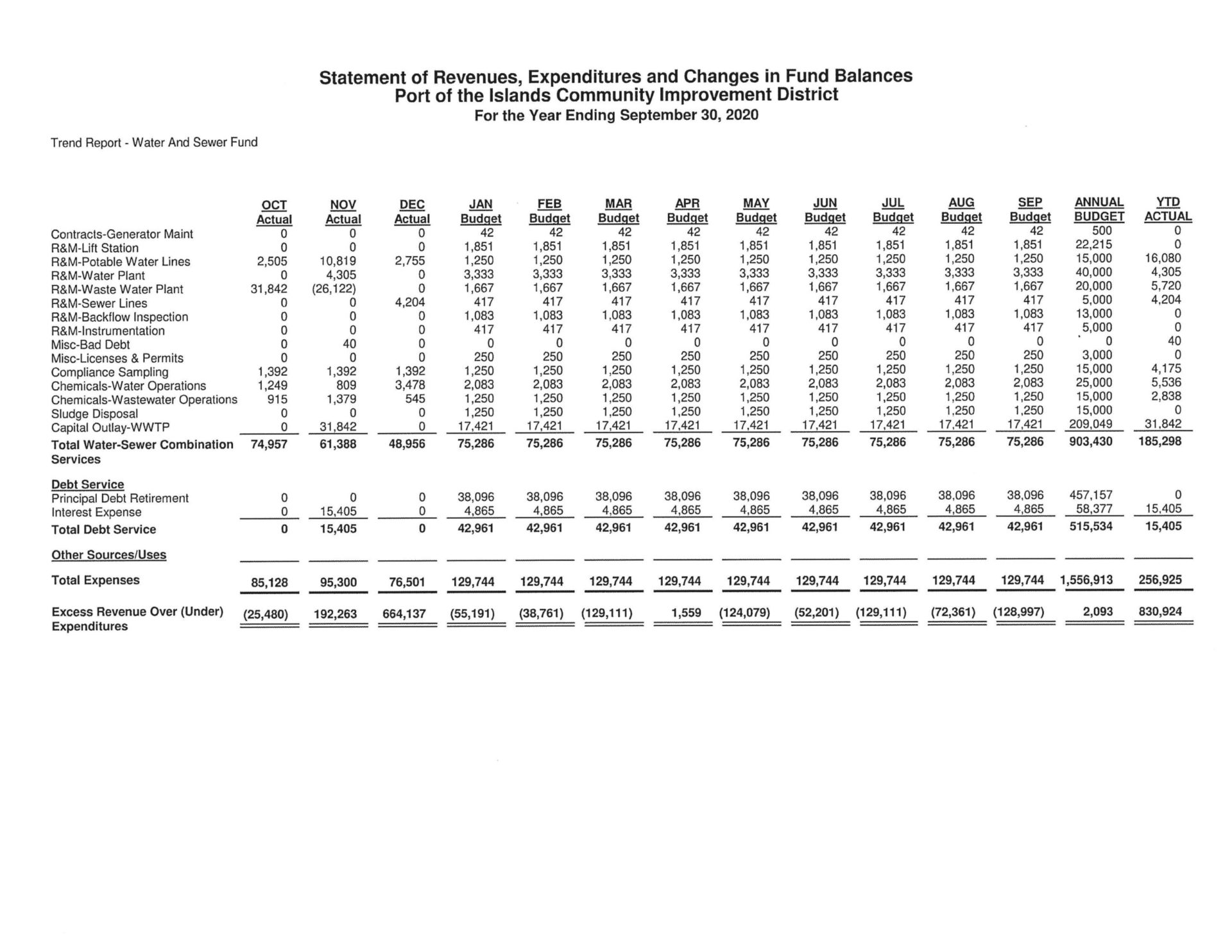 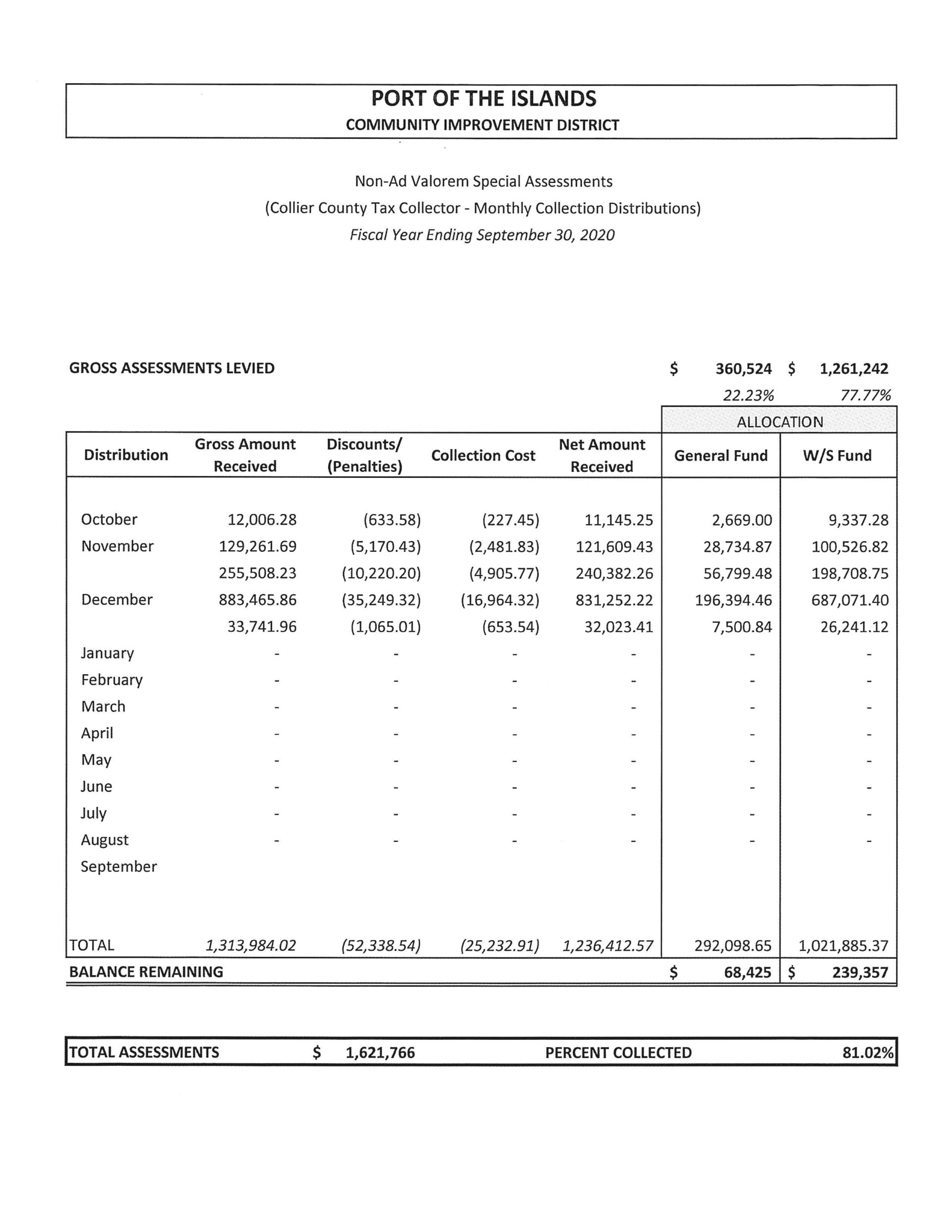 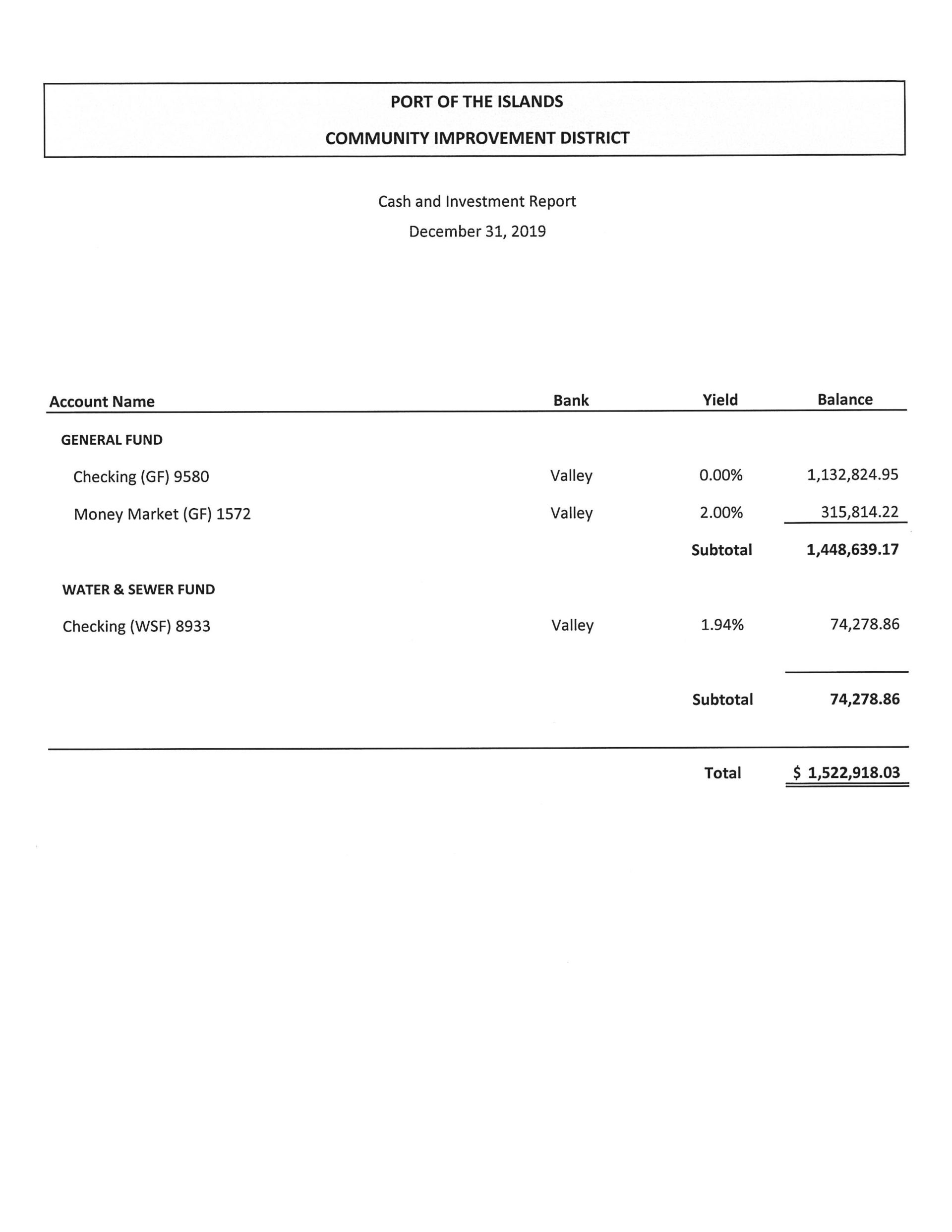 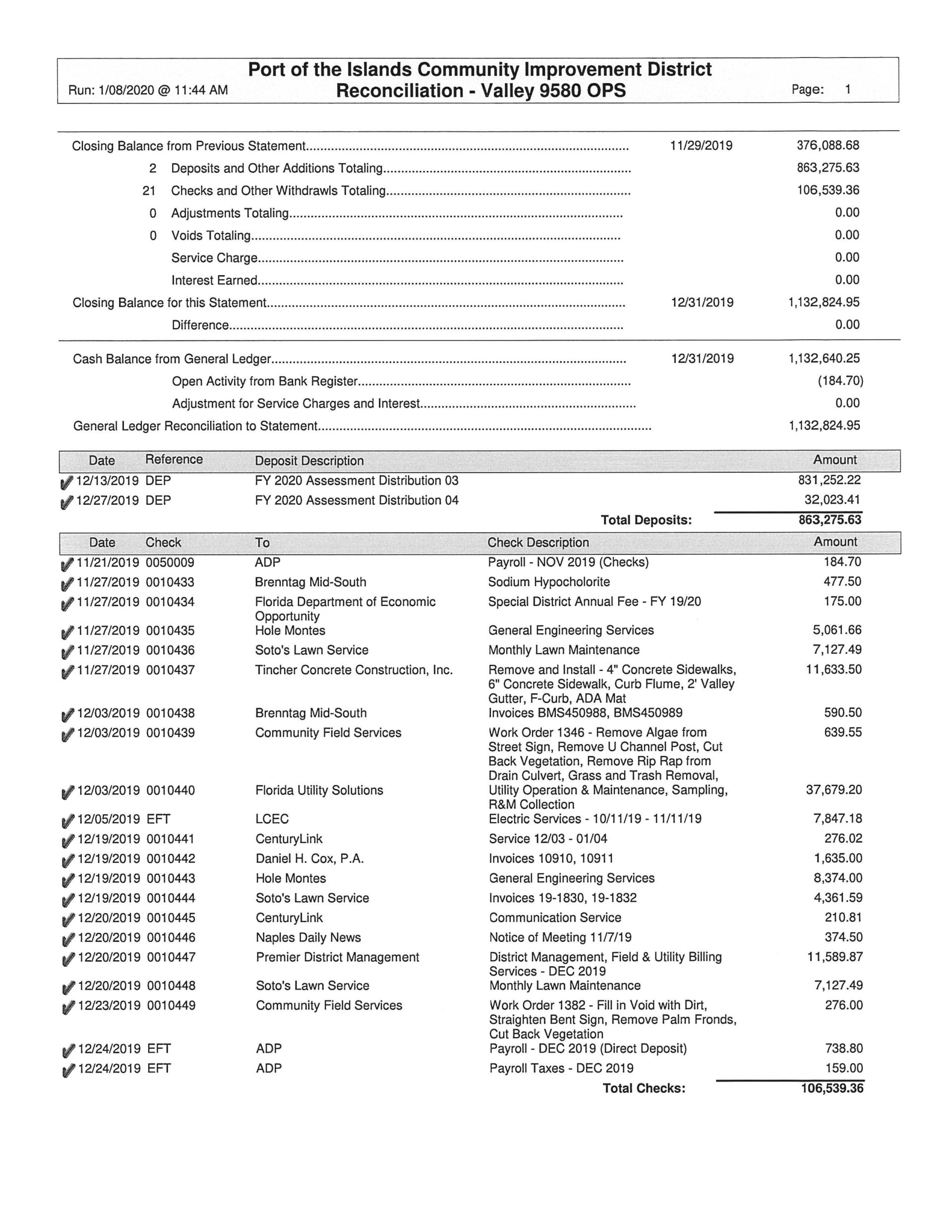 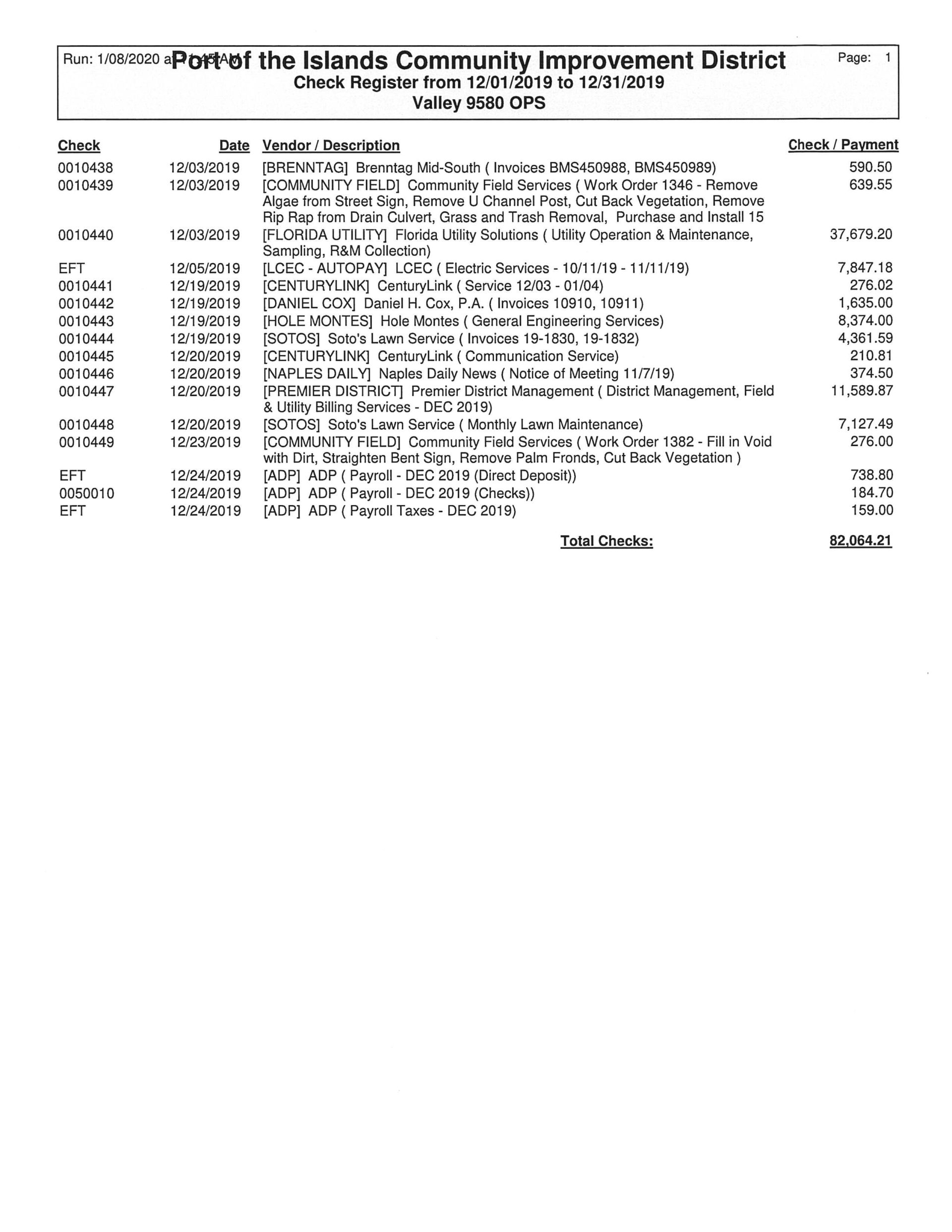 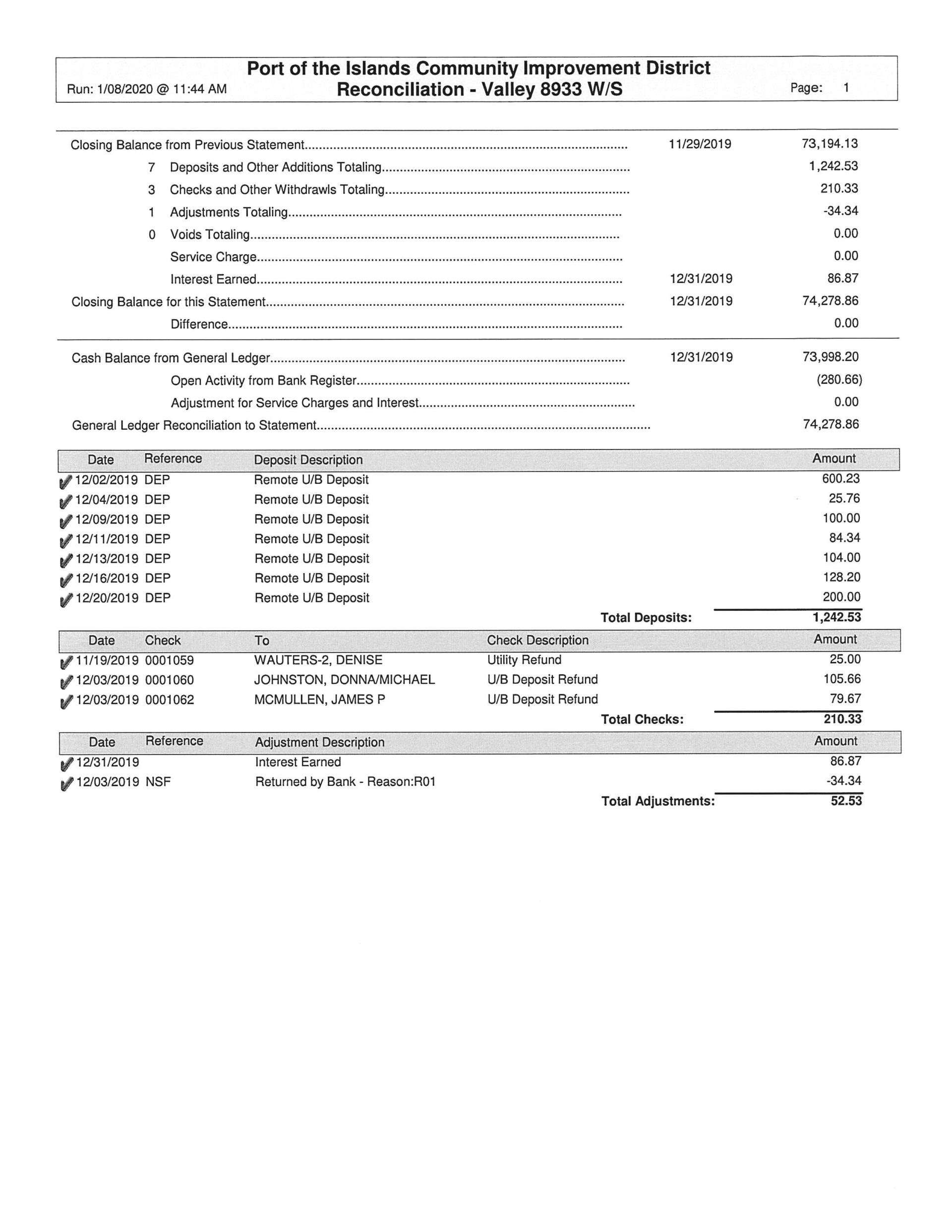 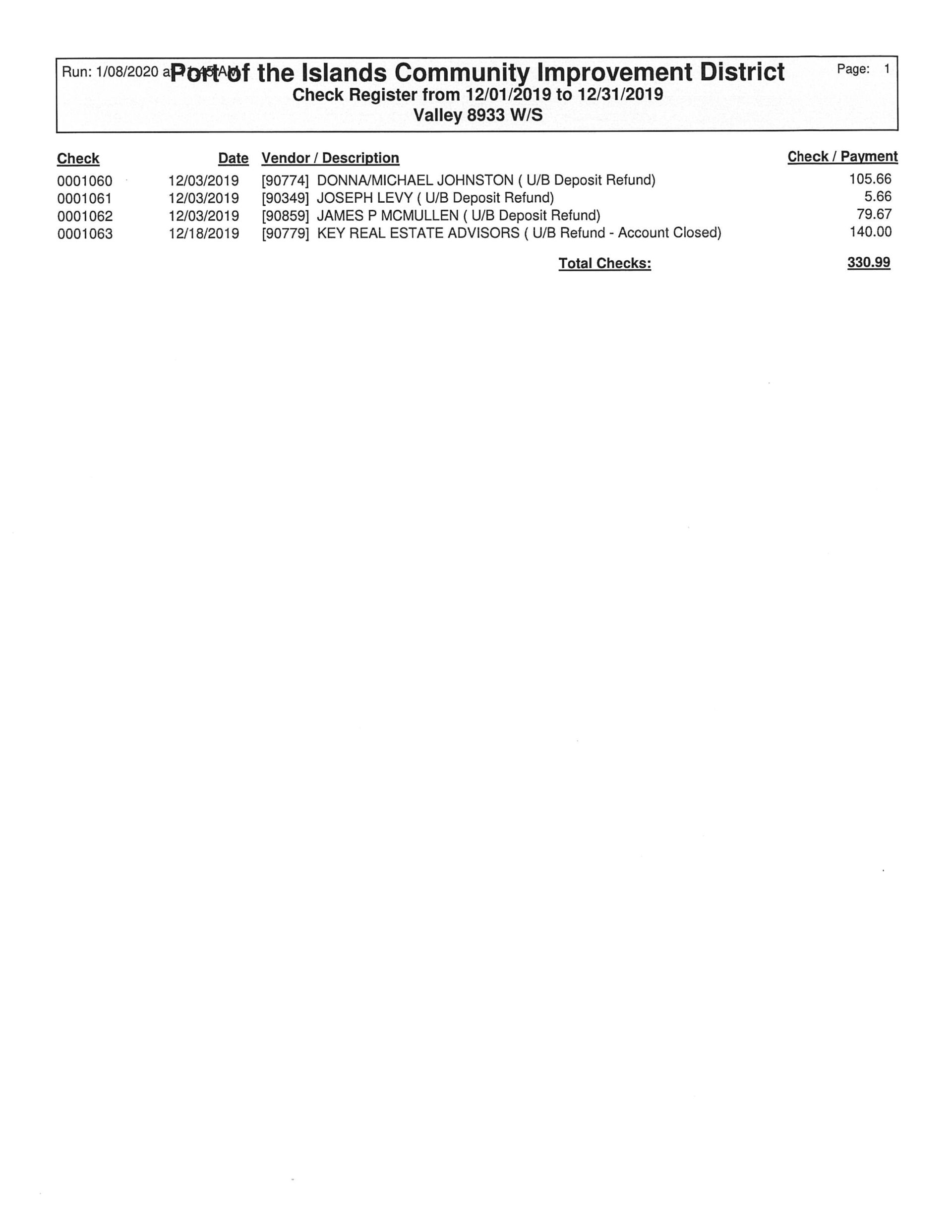 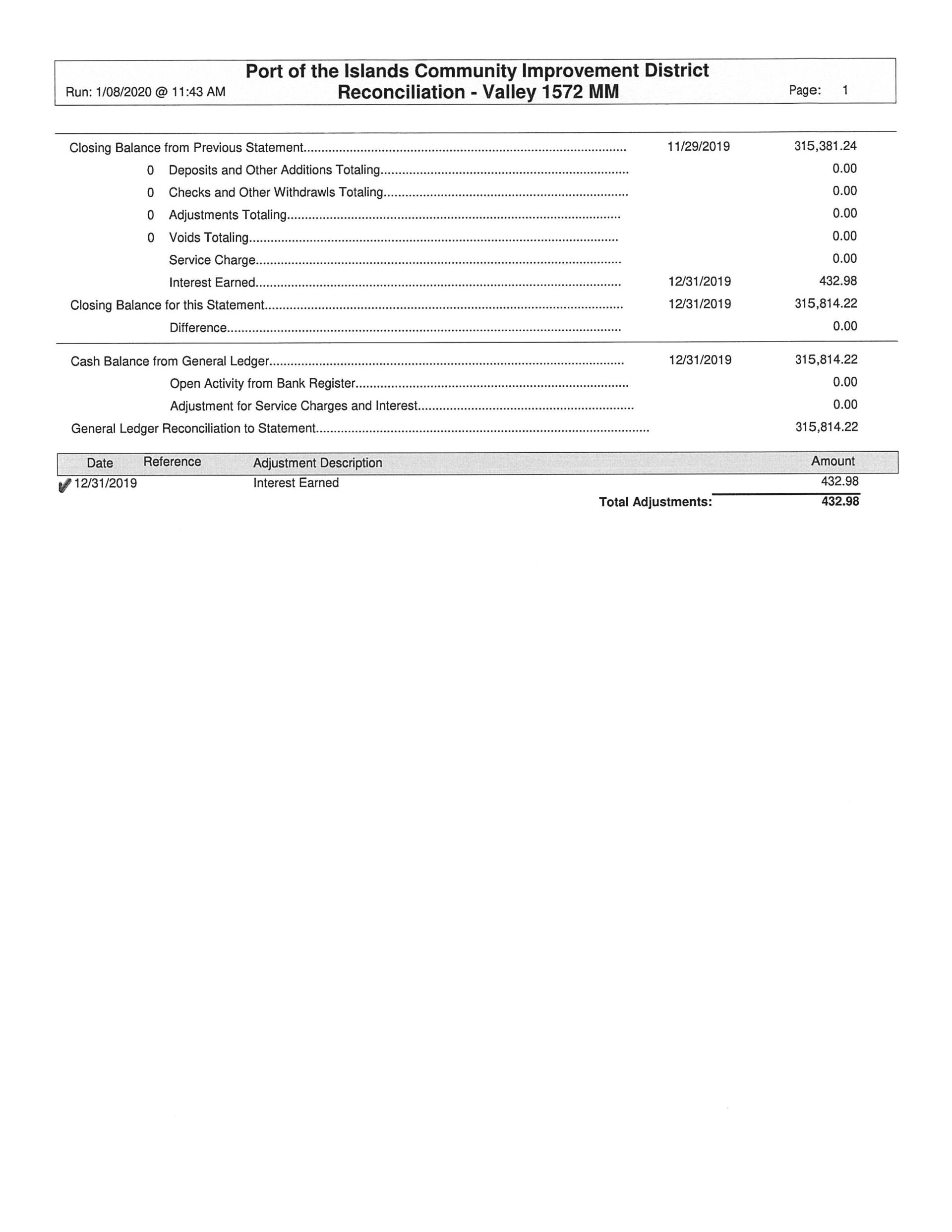 C. Shoreline Weeds: Weed concerns that should be addressed:

D. Submerged Weeds: Hydrilla that was observed in pond #2 next to the headwall closest to Cays Drive last month has been treated.

E. Algae: A low amount of algae was present in the 1st and 3rd retention ponds.

I. Bank Erosion: No concerns observed this month.

A. Asphalt: No new concerns were observed this month.

B. Potholes: The potholes on Union Road east of the old hotel are continuing to increase in size.

F. Roadway Lighting: No new concerns were observed this month.

Vegetation at the end of Cays Drive is beginning to encroach into the sidewalk area and needs to be cut back. We’ll have our maintenance technician complete this task.

B. Water Control Structures (WCS): All structures are currently clear of debris.

F. Drainage Swales / Dry Detention Ponds / Banks: The overgrown vegetation within the detention ponds around the water plant should be cut down and removed during this dry season. Once the vegetation has been removed the inter-connect pipes should be inspected and cleaned out (if needed) to allow for optimal drainage.

The following issues were observed this month.

B. Side Monuments: No concerns observed.

C. Landscaping: Several shrubs in front of the Newport Drive (exit side) monument need to be replaced.

D. Landscape Lights: The landscape lights facing the Cays Drive monument sign were adjusted to light up the sign.

E. Flagpole: No concerns this month.

Irrigation wires remain exposed in the Newport Drive median next to where Soto transplanted the agave plant. If the wires are active, they should be buried.

A. 12/27/19: Homeowner at 123 Newport Drive informed us that the new house being build just south of him is causing storm water drainage issues due to the driveway culvert being clogged with silt. We inspected the area and confirmed that the culvert needs to be cleaned out. The new homeowner will be notified.

A. Fire Hydrants: No concerns observed this month.

B. Meter Boxes / Valves: No concerns observed this month.

D. Wells: Roadway to the wells needs to be cutback by Soto.