February 14, 2020
Board of Supervisors
Port of the Islands
Community Improvement District

The regular meeting of the Port of The Islands Community Improvement District Board of Supervisors will be held on February 21, 2020 at 9 AM at the Orchid Cove Clubhouse on 25005 Peacock Lane in Naples, FL 34114. The Agenda is included in Section 2 and a few points of interest are as follows:

Any supporting documents not enclosed will be distributed at the meeting. The next meeting is scheduled for March 20, 2020. If there are any questions or requests prior to the meeting, feel free to contact me.

The meeting of the Port of the Islands Community Improvement District was held on Friday January 17, 2020 at 9 a.m. at the Orchid Cove Community Center on 25005 Peacock Lane in Naples, Florida 34114.

The meeting was called to order and the District Manager called roll. All Board members were present, except Supervisor Dillon. Also present were District Engineer Ron Benson, Robert Soto from Soto’s Lawn Service and Mitch Gilbert from Florida Utility Solutions.

On MOTION by Chairman Davis, seconded by Supervisor Kehlmeier, with all in favor, the Agenda was approved as presented.

On MOTION by Chairman Davis, seconded by Supervisor Kehlmeier, with all in favor, the Meeting Minutes for December 20, 2019 are approved as presented.

A. Report for December

On MOTION by Chairman Davis, seconded by Supervisor O’Connell, with all in favor, the Board accepted the Financial Statements for December 31, 2019 as presented.

The District Manager presented the new CID website and briefly navigated through it to familiarize the Board of Supervisors with the layout. He stated that a few changes will be made to the Agenda packets going forward, such as the Field Report no longer containing pictures and the Financials being condensed in order to meet ADA compliance requirements. However, the Field Report with pictures and the larger Financials document will be provided electronically under separate cover. He also stated that certain support materials will not be included in the packet if they aren’t ADA compliant. However, these documents will be provided under separate cover upon request. The Board agreed that sending electronic Agenda packets via email was not necessary going forward and instead agreed to obtain them directly from the website. The District Manager notified the Board that the website is going live on February 11th.

The District Manager stated that there are three delinquent accounts that need to be written off. The Board agreed to write these off.

On MOTION by Chairman Davis, seconded by Supervisor Kehlmeier, with all in favor, the Board approved the write off of these three accounts.

The District Manager presented a budget schedule for Fiscal Year 2021 for informational purposes and to request budget goals from the Board be presented at the next meeting. The District Engineer is going to update the Capital Improvement Plan (CIP).

A. Field Report for January

The District Engineer stated that this is complete, pending any requests for additional information from the South Florida Water Management District.

The maintenance will continue as currently established with the Field Manager checking the swale for obstructions during his inspections, and discussing anything he sees with the District Engineer.

The District Engineer stated that he and the District Manager are working with the contractor for the Villages at Stella Maris on their boat slip project. For this project the CID would need to provide them a master water meter and charge them for the meter installation. He informed the Board that he told the contractor the CID uses Collier County utility standards.

The District Manager discussed an email with updates from the District Attorney. The County now owns the North Hotel. Therefore, discussions between the CID and the County can resume on this topic.

Neither the District Manager nor the District Attorney have heard anything from the marina owners or their attorneys in this regard.

The District Manager stated that it is still too cold for the littorals to be planted and that he will keep them posted on this topic.

The Board further discussed the two proposals that were submitted last month. However, it was decided to postpone this topic until the next Board meeting in order to obtain further clarification on the proposals submitted.

The District Attorney felt the statute of limitations ran out after 4 years. However, the Orchid Cove Attorney stated that there is not a statute of limitations for this and that if they sue they can charge the CID interest. The District Manager was able to come to a compromise that all parties felt was fair. The CID will stop billing Orchid Cove the $417 a month for electricity for the decorative light poles and Orchid Cove will no longer charge the CID $50 to use their meeting room every month and any concern over being overcharged will be dismissed.

On MOTION by Supervisor O’Connell, seconded by Supervisor Kish, with all in favor, the Board accepted the proposed settlement offer with Orchid Cove.

Supervisor O’Connell commented on reimbursement for the ham the CID authorized her to purchase as a thank you to Florida Utility Solutions for painting the fire hydrants throughout the community.

Randy Resch commented on an issue with Comcast that Orchid Cove is having. One of the infrastructures is severely rusted out and poses a hazard.

Audrey Sanders commented that she has contacted Comcast regarding this concern and they responded by saying they are outsourcing the repairs as it is a large job. She also commented on fencing repairs and stated that they are waiting for the insurance money to come in to make those repairs.

The District Manager commented that the Board members CID emails are being set up for use. He also commented that an agreement will be drawn up between the CID and Orchid Cove for the settlement agreement.

On MOTION by Supervisor Kehlmeier, seconded by Chairman Davis, with all in favor, the meeting was adjourned at 11:18 a.m. 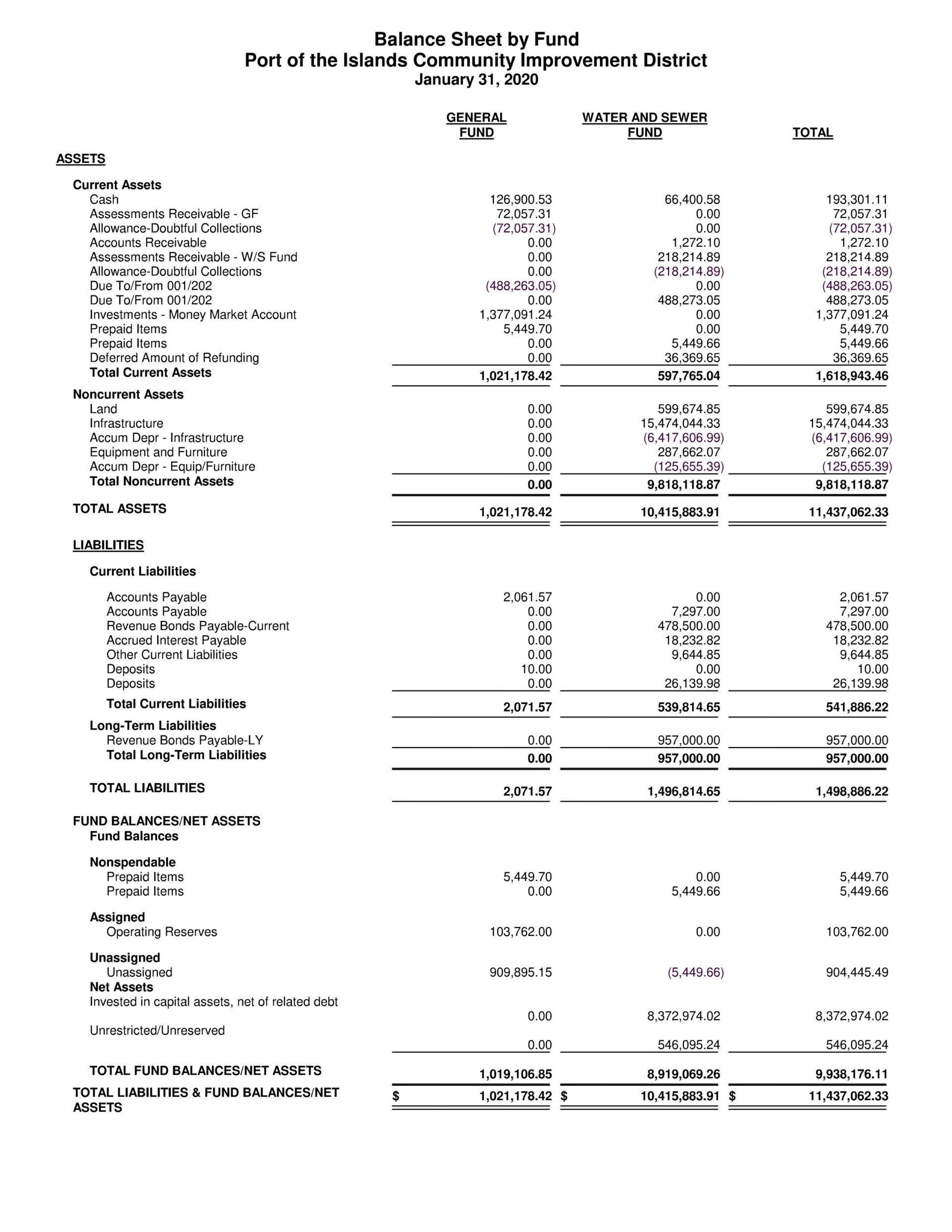 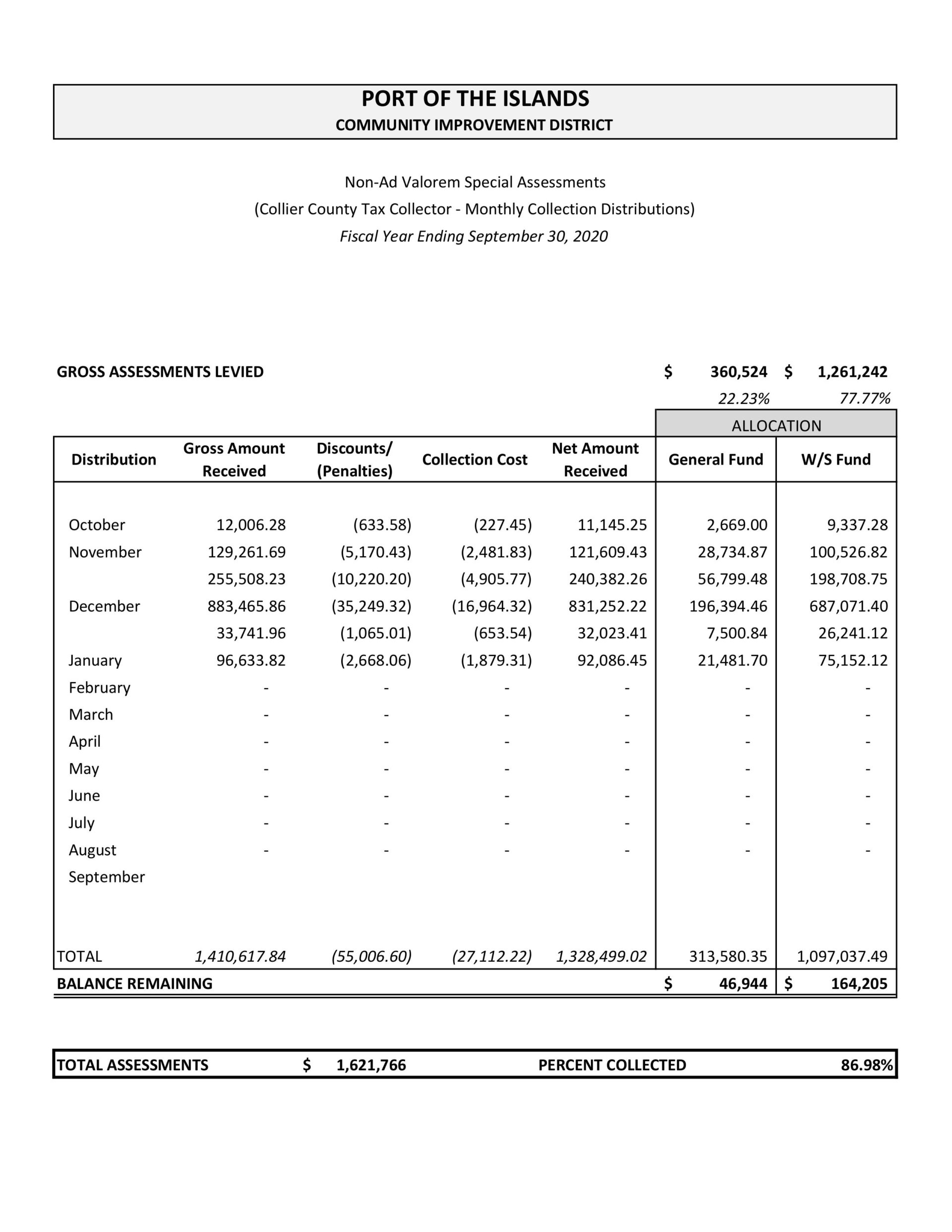 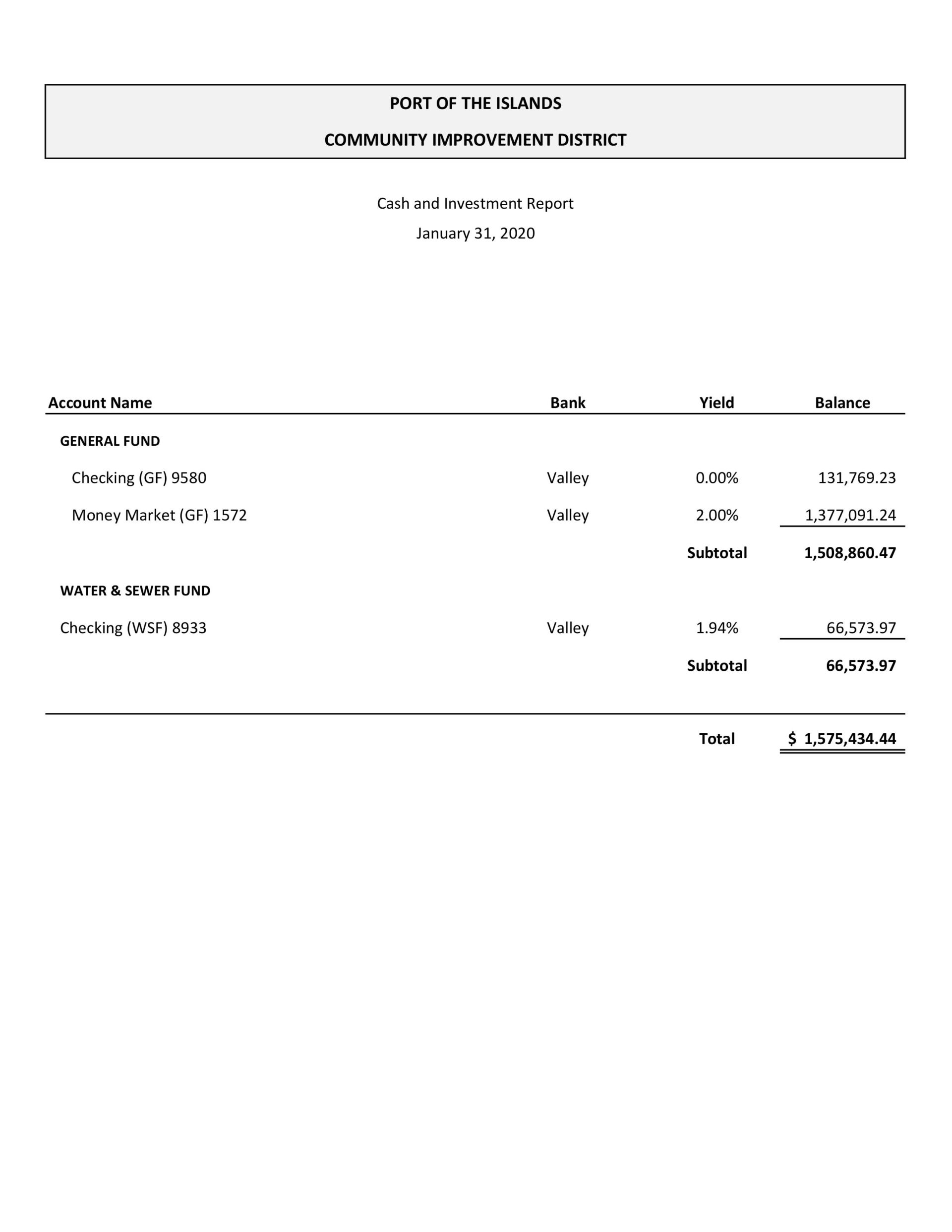 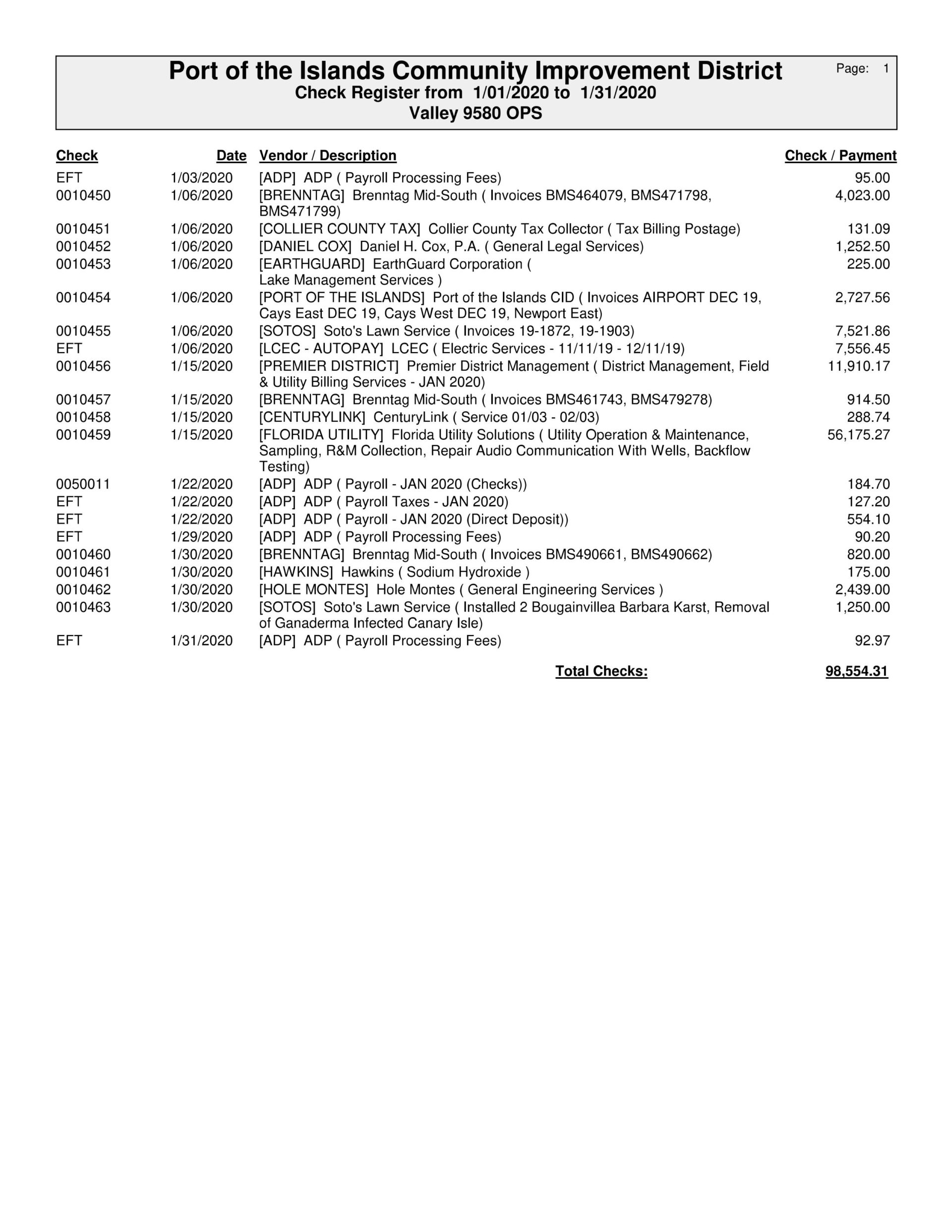 a. Lake Maintenance: The retention ponds remain in moderate condition this month. Shoreline grasses have been treated, water levels are average for this time of year, no submerged weeds present and no concerns with algae. Turbidity cloudiness / murkiness) remains high throughout all the ponds. Additional pond management details are below.

c. Shoreline Weeds: No concerns observed this month. Torpedo grass that was identified in January has been treated and is dying off.

h. Shoreline Landscaping: The cord grass on the north end of retention pond #2 has recently been pruned.

i. Lake Bank Erosion: No concerns observed this month.

a. Asphalt: No new concerns were observed this month.

b. Potholes: The potholes on Union Road east of the old hotel are continuing to increase in size.

f. Roadway Lighting: No new concerns were observed this month.

b. Water Control Structures (WCS): All structures are currently clear of debris.

c. Flumes: All flumes were clear of debris this month.

e. Drain Pipes: The drain pipe / head wall on the north end of the second retention pond remains separated. At some point the CID will want to have this repaired. Picture on the following page.

f. Drainage Swales / Banks: All the drainage swales were inspected this month and the following issues were observed.

g. Dry Detention Ponds: The vegetation within the large detention pond on the southwest corner of the plant has been cut down and raked to the sides. With the area now open, it would be a good time to inspect / clean out the drain culverts.

5. Front Entrance Monuments: The following issues were observed this month.

b. Side Monuments: Both monuments need to be pressure washed as they have cobwebs and green algae on them. We’ll cleaned these while we have the pressure washer onsite.

c. Landscape Lights: All timers were adjusted this month as each location was off by 30 to 45 minutes.

d. Flagpole: No concerns this month.

a. No new concerns observed this month.

b. Irrigation wires remain exposed in the Newport Drive median next to where Soto transplanted the agave plant. If the wires are active, they should be buried.

a. 1/20/20: Homeowner at 120 Wilderness Cay informed us that they are still having drainage issues in front of their home. We inspected the area and believe that the new concrete that was poured by Tincher Concrete isn’t at the correct pitch and is causing the water to stay within the drainage gutter. Tincher Concrete is going to be notified of this issue.

b. 12/27/19 Update: Homeowner at 123 Newport Drive informed us that the new house being built just south of him is causing storm water drainage issues due to the driveway culvert being clogged with silt. The builder was contacted last month, and he had the driveway culvert cleaned out.

a. Fire Hydrants: No concerns observed this month.

b. Meter Boxes / Valves: No concerns observed this month.

Below is a list of approved work orders for Soto that we’re monitoring. Completed tasks are removed from the list on the following month.

Completed tasks are removed from the list on the following month.